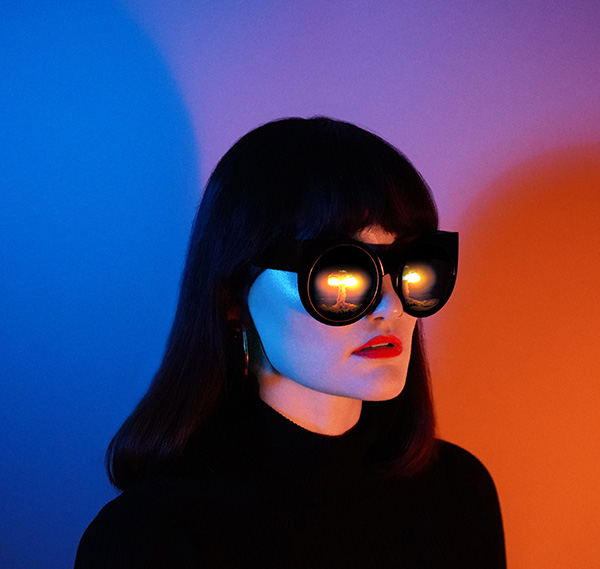 With their sixth album, ‘GHOSTS ON TAPE’, Blood Red Shoes joins the current trend of writing song titles in capitals. The titles on the album seem to be screaming at you, with the exception of three titles in lower case which are between brackets. This triggers our curiosity and fascinates even before we press play.

Steven Ansell and Laura-Mary Carter released their debut album fourteen years ago, followed by a new album almost every two years. After a longer period of silence, the band took a different path in 2019. A little less “danceable punk”, more electronic influences. More of the darkness that you could hear in older work, but that now really reaches the surface. ‘Get Tragic’ marks the beginning of this path and now, three years later, it seems like the band has reached a clear station. A station inspired by true crime and murder stories and that inspiration can be heard. ‘GHOSTS ON TAPE’ draws you into a shadowy world, with a gloomy atmosphere of fog and icy chills with the threat of unpleasant surprises. The name ‘Blood Red Shoes’ gets a whole new meaning in this dark world.

‘COMPLY’ starts off instrumental. It’s haunting and puts you on edge where you feel that something isn’t quite right and that things are about to happen. After more than a minute, just when you wonder if the whole song will remain without lyrics, Ansell’s distorted voice breaks through the music. He sounds slightly tormented, more and more intense until he penetrates your brain with his voice. The mood is set. After the obvious serial killer and stalker vibes in ‘MORBID FASCINATION’ and ‘MURDER ME’, ‘(i’ve been watching you)’ turns out to be a short interlude of 36 seconds with static noises that can still be heard in the intro of ‘GIVE UP’. The way the lyrics are shouted out reminds us of ‘Light It Up’ from 2010, the difference that the music is now as loud and dark as the vocals instead of being a contrast by sounding relatively cheerful.

In ‘SUCKER’ and ‘BEGGING’ it’s Carter who pulls you through a nightmare in a slow, sometimes grim voice.  Repetitive guitar riffs, now and then slightly out of tune, are the foundation of ‘BEGGING’, which turns into another creepy interlude. ‘(you claim to understand)’ is 36 seconds of eerie sounds, distorted, vague voices that give you goosebumps. After that we hear anger and determination in ‘I AM NOT YOU’ and ‘DIG A HOLE’ with a lot of static in the background. Following all this, the first few tones of ‘I LOSE WHATEVER I OWN’ seem strangely calm at first, but it soon builds up to a fast-paced, rough sound. With lyrics that focus on feeling like an outsider, not belonging anywhere. It ends in noise, which buzzes along in the final interlude ‘(what have you been waiting for?)’ and fades into the pounding sound of ‘FOUR TWO SEVEN’.

With this last, lurid song about holding on to a broken relationship, the album ends as sinister as it began. An abrupt, straightforward end, but with the feeling that there could be more to come. The inspiration Blood Red Shoes took from true crime is evident, without it turning into a cliché. With ‘GHOSTS ON TAPE’, the band tells a story which seems to end with the last song. However just like in the true crime genre, it still feels a bit uneasy. Is this really the end? Is the case solved? Or will some unpleasant things emerge after all…

One thing that unfortunately does have a clear ending is the tour that was supposed to start this month to promote ‘GHOSTS ON TAPE’. Carter and Ansell had to cancel the tour because of Coronavirus restrictions that are still in force in Europe. Due to this, the shows in The Netherlands in early February will also be cancelled.

Do yourself and the band  a favour and buy a ticket for the online album launch on Thursday, 13th of January at 8PM (Dutch timezone) to enjoy the new songs as live as possible. We hope that despite the cancelled tour, ‘GHOSTS ON TAPE’ will finally ensure that Blood Red Shoes gets the worldwide appreciation and acknowledgement the band deserves.